The Movement of God

WATCH AND LISTEN TO THIS MESSAGE SERIES 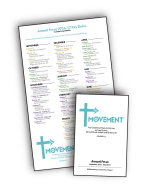 Our Annual Focus for September 2016–June 2017 is titled Movement. Click below to view our accompanying materials!
ANNUAL FOCUS BOOKLET

About This Message Series

In Colossians 1:15 we read that Jesus “is the image of the invisible God...” The season of Advent celebrates God's unmatched pursuit of reconciliation with by becoming . Theologians refer to this event as “the incarnation.” While this may not be a word we use often, the process by which the incarnation occurred included both the miraculous and the mundane, the appearance of angels and the shepherding of sheep. In light of this, the doctrine of the incarnation must be understood on both a spiritual and practical level. The Christmas story reveals both that God became flesh in real time and space as well as how God became flesh in real time and space. This Christmas season as we study both of these aspects of the incarnation, we hope to embrace the full implications of believing in and serving the God who first moved toward us as a baby in Bethlehem.

VIEW Other PAST MESSAGE SERIES